This post is part three in a series about the intersection between peace issues and gender. This series is meant to push people to think critically about the ways in which women are distinctly impacted by peace issues. Issues of peace impact everyone; at the same time, all peace issues are feminist issues. Thus, all peace issues require a gendered lens in order to be adequately addressed.

Sanctions have, over the last several decades, become one of the go-to foreign policy responses within the international community, and the United States is no exception. The US has imposed sanctions on numerous countries under the guise of democracy and national security. It is true that sanctions can be effective political tools. What is more accurate, however, is that sanctions kill.

The economic repercussions of sanctions on target countries is often devastating. This reveals the inherent hypocrisy of sanctions. The United States, among other powerful nations and international bodies like the UN, impose sanctions as punishment for leaders of countries that do not obey international norms. In most cases, the desired outcome is to pressure these governments to change their behaviors for the sake of their citizens. The achieved outcome, on the other hand, is to inflict devastating economic damage on the most vulnerable citizens of these target nations.

On average, sanctions reduce the GDP of target nations by a whopping* 3%. This number, while high, would not be quite as devastating if this economic suffering was felt equally by all citizens of the target country. Instead, it is the most vulnerable groups that bear the brunt. What, specifically, does this mean?

Click the image to learn more about how sanctions hurt the women of North Korea.

Take North Korea, for example. The United States is one of several nations and supranational bodies that have imposed sanctions against North Korea, mostly due to the country’s nuclear weapons program. One could argue that these sanctions have proven effective because they have severely impeded the state’s economic development. At the same time, the sanctions also impede the ability of the country and international aid organizations to address the dire humanitarian situation.

One study found that sanctions on North Korea caused more than 3,968 deaths in 2018. Pregnant women compose a significant percentage of those who died. Ninety-nine percent of pregnant women in North Korea lacked access to emergency reproductive kits to assist with life-threatening complications during pregnancy due to sanctions and funding shortfalls.

Delays, red tape, and overcompliance, all side effects of economic sanctions on North Korea, obstruct life-saving aid to the nation, which suffers from extreme levels of food insecurity, poverty, and inadequate clean water and sanitation services, on a daily basis.

Other sanctioned countries experience the same effects. Iran has struggled to receive essential humanitarian aid due to sanctions. More recently, the coronavirus pandemic has rocked the country, yet sanctions continue to prevent helpless people there from receiving life-saving assistance.

The effect of sanctions on humanitarian aid certainly hurts all members (or at least the majority) of the target country. Women and other marginalized groups, however, bear the brunt of the suffering. When a country’s economy shrinks due to sanctions, women are more likely than men to experience discrimination in hiring practices, as well as more frequent layoffs and firings. Because household management and reproductive work are considered the primary responsibilities of women, their jobs are seen as expendable when compared to men’s. Further, women are overrepresented in sectors that sanctions disrupt the most, such as electrical equipment, agricultural goods, seafood, and textiles.

As women lose their jobs in the midst of the struggling economy, welfare services that benefit women tend to disappear, such as state-supported education, health care, and maternity leave. Economic despair has pushed women into the informal labor market and contributed to higher rates of female prostitution and human trafficking. 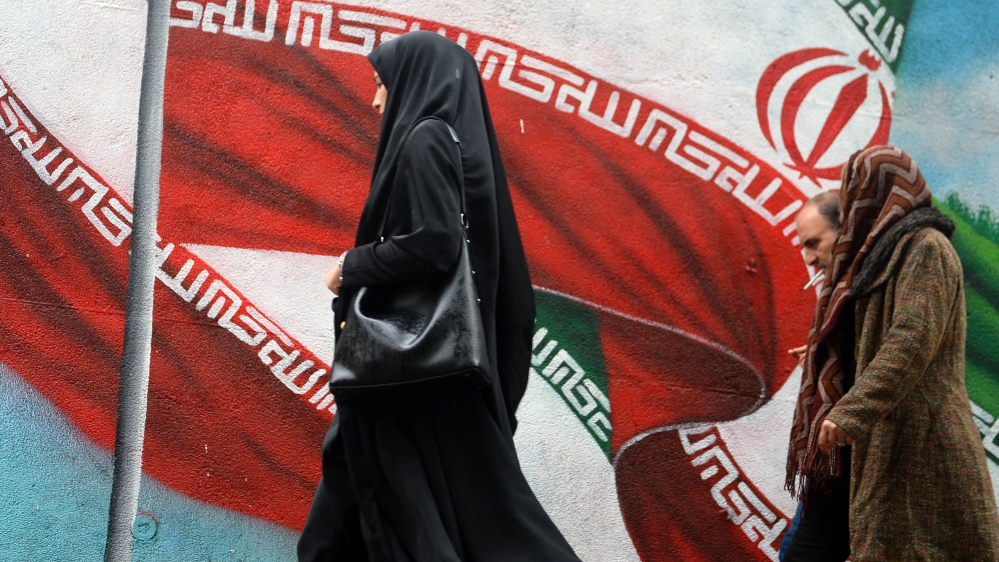 Click the image to learn about why Iranian women are among the most vulnerable to US sanctions.

The economic implications of sanctions only exacerbate social inequalities for women in target countries. Economic suffering can motivate individuals to violent acts; in Venezuela and Iraq, for example, rates of gender-based violence increased due to sanctions. Widespread violence and growing political disorder in a country often results in government repression in order to curb this violence. Women are already limited in many countries in the extent they may exercise political rights, and this repression reduces or eliminates women’s ability to freely participate in political and cultural activities.

While sanctions continue to disadvantage women across the world, it is questionable whether many of these sanctions abide by international human rights expectations.

Women bear a disproportionate share of the burden of sanctions, yet they lack the ability to influence international relations. The minority of diplomatic postings are occupied by women, and these positions tend to be low-level. Women compose less than 20% of the UN Security Council, which has helped determine 30 sanctioned states.

Economic sanctions have devastating effects on target countries, but the strain that they place on women and other marginalized groups is simply inhumane. They experience a heavier economic burden than men, but also, sanctions impact women’s health and reverse gains made in women’s social and political rights.

Use your voice to help the millions of voiceless women who suffer due to sanctions.

First, call your Senators and House Representative now at 202-224-3121. We cannot achieve change without public pressure. Here’s a sample script:

“Hello, my name is __ and I am calling from <town>. I’m extremely worried about the impact of U.S. sanctions on the women of Iran, Venezuela, and other countries. I’m urging __ to do three things.

Initiate Congressional hearings on the impacts of sanctions, in particular their devastating impacts on women.

Then, follow up with an email message to Congress and the Administration. Click here to send a message to your representatives, to the White House, and to the Secretary of State. Feel free to tailor your message to demand a gendered lens be used in reviewing U.S. sanctions.

Thank you for doing your part to end sanctions!

Black Radical: The Life and Times of William Monroe Trotter