225 Massachusetts activists came together in Cambridge on November 9 to discuss how to combine the peoples’ movements against endless war, climate emergency, racism, and social and economic injustice into a powerful force that can turn this country around in 2020.

In Rep. Ayanna Pressley’s keynote, she said, “Our organizing silos are breaking down for the better.  The same activists are working on Separation of families at the border and in our neighborhoods, on Public health and the epidemic of gun violence…. Peace is foundational to building up ourselves and building up our community.  I stand with you in the dogged pursuit of peace and justice.”   Pressley pledged to focus on military spending, oppose unjust sanctions and push to re-examine U.S. military aid to Israel.

Michael McPhearson of Veterans for Peace called for a full spectrum movement to confront white, patriarchal, Christian superiority. Basing his call on a historical analysis of past intersectional movements, he explained how to build it with practical advice.

Iraq/ Afghanistan veteran and historian Danny Sjursen described his transformation from gung-ho warrior to antiwar critic, and made the case that the US is an empire and that empires always come home. Torture, surveillance, control of the press, veterans’ suicide, and starvation of domestic services are the consequences for us.

Massachusetts Teachers Association president Merrie Najimy, immigration rights activist and scholar Alexandra Piñeros Shields, climate and peace activist Nick Rabb, and anti-racism organizer Kevin Peterson each described how their area of struggle relates to peace and to the overall progressive agenda.  Activist and author Medea Benjamin closed out the day, pointing out that movements are intersecting more than ever in the current emergency.

Video of all the conference presentations is collected here: https://www.youtube.com/playlist?list=PLmd7Hgtj_DpokA92iDNvSC3QVJdWD_48m.  More still photos by Louis Angel Brown: https://drive.google.com/drive/folders/1-M39X9mz74FqhALRyWQrrIYfcvnCvHif. The New York Times Magazine‘s story on Rep. Pressley on Nov. 24, contains a photo (right) of her chatting with conference attendees.

The event was co-sponsored by 17 organizations, many of whom organized or participated in breakout sessions to go deeper into the issues in small groups. We look forward to continued collaboration with our outstanding speakers, cosponsors, breakout resource people, and everyone who participated in the conference, as we build the peace and progressive movement’s power for 2020 and beyond!

As 2019 draws to a close, we are asking you to support our work by giving to our 2019 Fund Drive. It takes money to put on events like “Rising Up for a Livable Future”!   A strong peace movement is needed today more than ever. U.S. threats of war in Iran, Korea, and Venezuela, preparation for great power war with Russia and China, and continuing wars in Afghanistan, Yemen, Syria, Libya, Iraq, Somalia, and Niger and more continue, accompanied by one-sided support for Israel and Saudi Arabia.  The Trump Administration has withdrawn the U.S. from arms control treaties and from the Paris Climate Agreement.  Military spending is rapidly increasing — $738 billion in the current fiscal year, or $989 billion if all related categoreis are included.  Racism, anti-immigrant actions and rapid destruction of the climate are the order of the day. 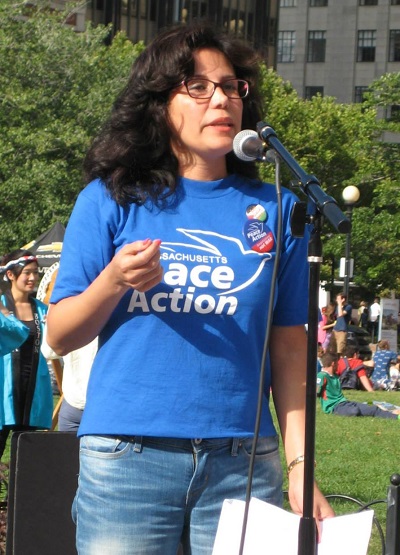 Against this tide, and with increasing support from growing numbers of peace advocates, Peace Action has survived and grown.  Our educational arm, Massachusetts Peace Action Education Fund, has a 2019 fundraising goal of $140,200.  We have raised $112,652 as of November 20.   That still leaves $27,348 to raise in the last six weeks of the year to meet our goal.   We would love to exceed that goal to enter 2020 strong!

All donations are tax-deductible.  Please give generously!

And:  as a special offer for the holiday season, we’ll send a Mass. Peace Action T-shirt to those who donate $100 or more!   (Please specify size)

The Next Two Years and Beyond- Conference Schedule

Pivoting for Peace in Asia-Pacific: Schedule

by Ray Acheson, Beatrice Fihn, and Katherine Harrison* originally posted on Reaching Critical Will   Momentum for a ban   “Nayarit is a point of no return,” concluded the Chair of the Second Conference on the Humanitarian Impact of Nuclear Weapons, held from 13–14 February in […]